(Redirected from The Tower of London)

This page contains information about multiple aspects of the Tower of London. The Tower is home to multiple aspects of London's history within the complexes several buildings. The Bloody Tower, the Crown Jewels, torture practiced in the Tower, and the White Tower are four main attractions within the complex. In addition, there are smaller attractions such as the Royal Beasts, exhibited by animal sculptures throughout the complex.

The Bloody Tower was initially designed as an entrance to the castle. In later years it was re-purposed as a prison for high profile prisoners such as Sir Walter Raleigh, two Archbishops of Canterbury and a Lord Chancellor. However, its name does not come from its time as a prison but from the disappearance of the Little Princes. The princes were the two sons of King Edward IV. In 1483, their uncle, the Duke of Gloucester, sent them to the tower and the boys were declared illegitimate shortly after. The princes were never to be seen again. In 1674, a building near the White Tower was demolished and two skeletons were discovered. They were presumed to be of the two princes. In 1933, the bodies were declared to be of two boys the same age as the princes. There are two main suspects in the murder of the boys. The first is their uncle, the Duke. After having the boys declared illegitimate, his right to the throne should have been secure. However, murdering the princes would guarantee his rise to power as King Richard III. This theory favored King Henry VII as he killed King Richard III to gain the crown. If King Richard III was seen as evil, than his murder would be better accepted by the people. The second suspect is King Henry VII who was also the husband of the princes' sister. Again, killing the princes helped secure his place in line for the throne. Instead of the power having to pass along the princes, the power was able to pass directly to King Richard III then himself.

The Crown Jewels are a marvel to the eye. They show the true elegance and posh lifestyle of the royal family. It is hard to imagine that £5 billion in jewels are sitting in one location. It contains 141 pieces including the Coronation Spoon, Imperial State Crown, and The Sovereign's Sceptre with Cross making it the largest collection of its kind. The sceptre has the largest colorless cut diamond in the world (530.2 karats). While they may seem unreachable, the Queen and other members of the royal family wear these pieces on special occasion such as royal christenings and weddings. Queen Elizabeth wore the Imperial State Crown for her coronation in 1953. She was also seen wearing Queen Victoria's tiara in 1955. The Crown Jewels can be dated as far back as 200 and 150 BC. A sword, brooch, ceremonial shield, and bronze crown were among the earliest pieces. Pieces were added after major war victories and canonizations. Just as they were gained, pieces were lost after losses. To read more about the crown jewels read this. 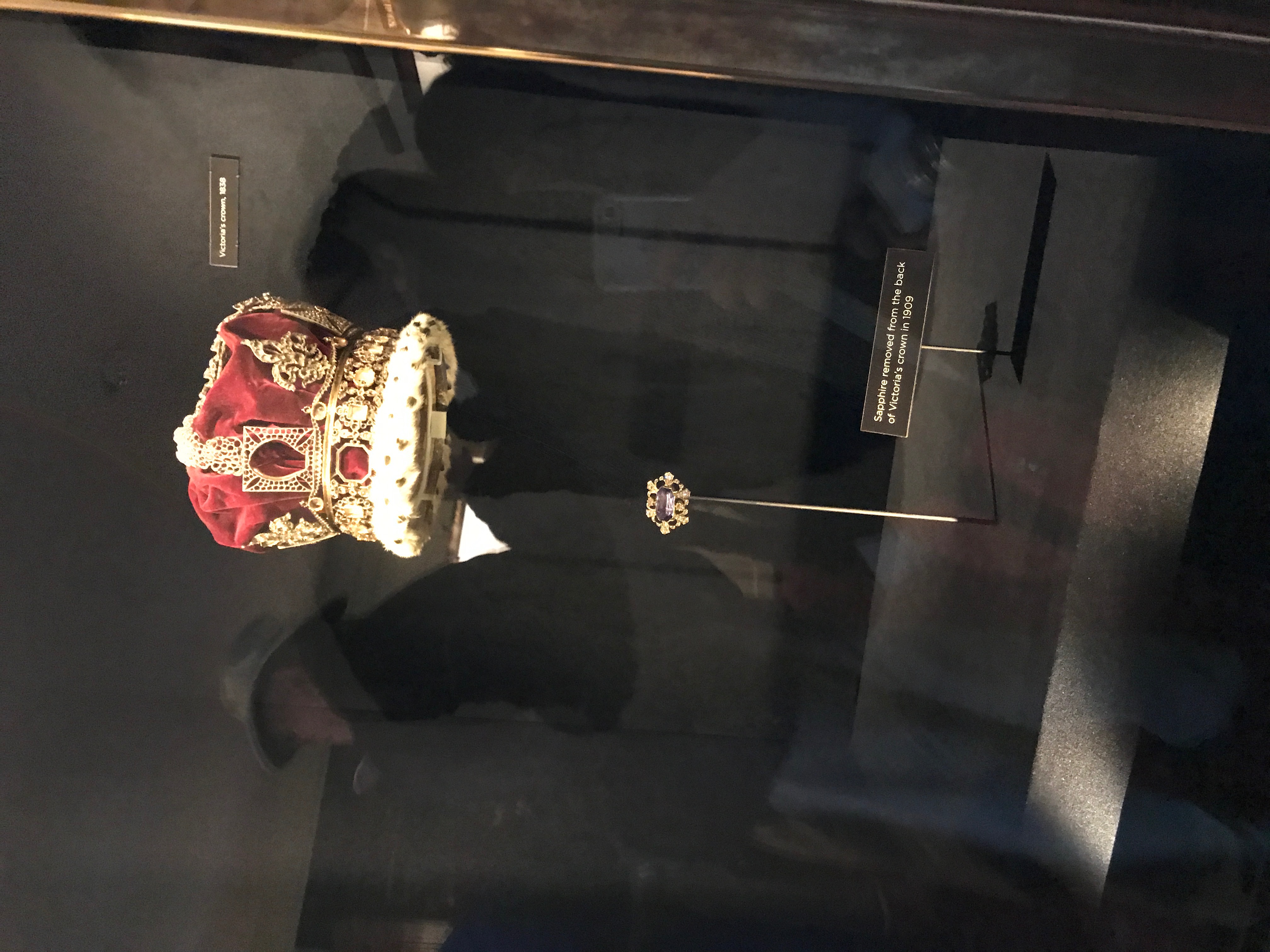 Torture in the Tower

When you walk into the tower it is hard to imagine that it was once used as a place for torture. However, as soon as you walk in you can visit the Wakefield tower and see a whole exhibit on prisoners and torture in the Tower. There are three different torture devices on display here, the manacles, the rack, and the scavengers daughter. The manacles worked by hanging the victim by their hands, with their arms above their head. The rack stretched the victims out, first raising them off the table, and then dislocating all of their joints. The scavenger's daughter worked in the opposite way and there were two versions. In the Wakefield Tower it crushed the body and in the Spanish Armories of the White Tower it twisted the body. 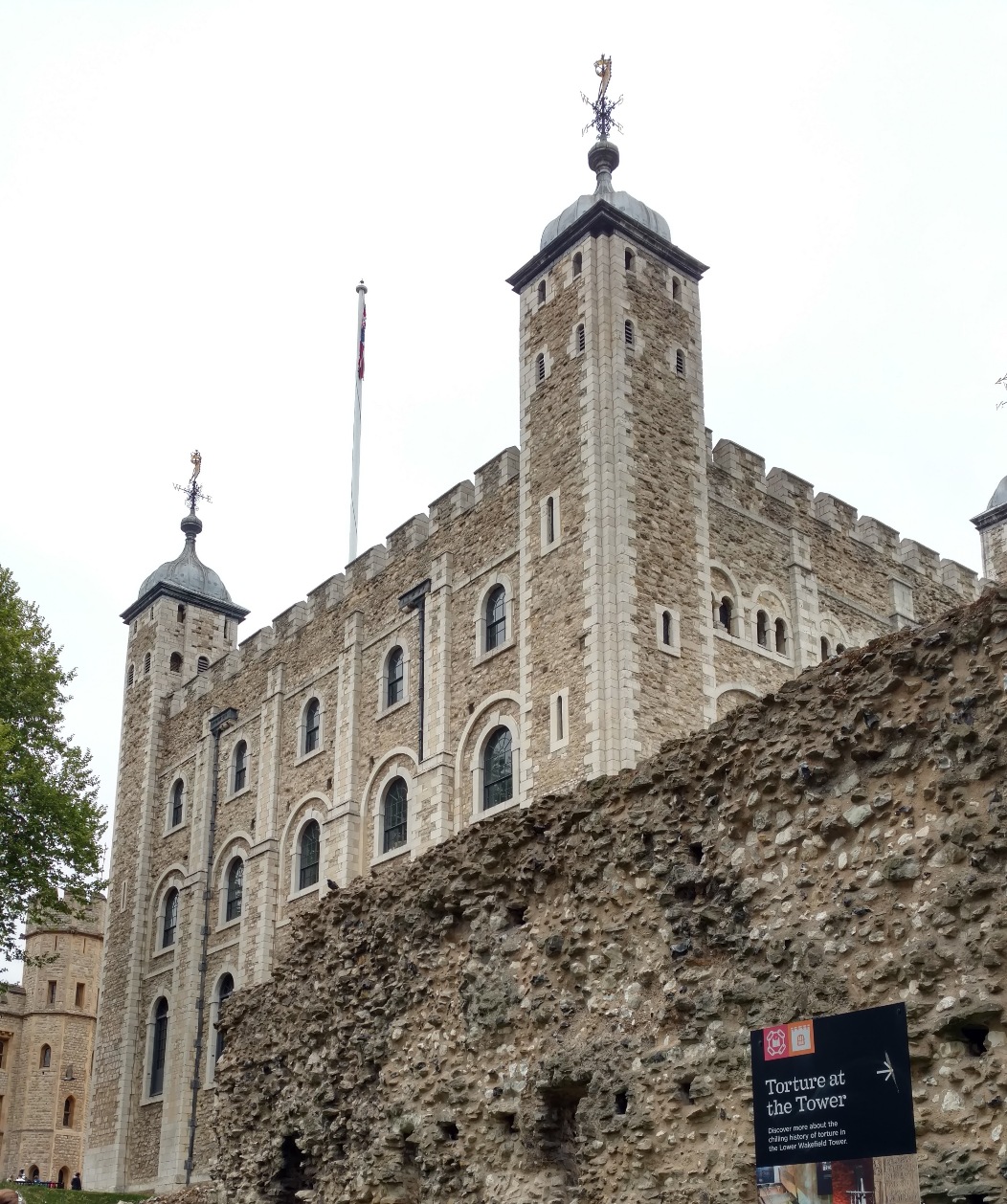 The White Tower's purpose has changed over time. Currently, it is being used as an exhibit for Medieval Armor and Weapons including Lances, Halberds, and royal weapons. Of the four floors available to visit, the first floor consists almost entire of a gift shop. The second floor boasts a large array of varying armor plates and full knight suits of steel. Ranging from imposing giant chest-plates and helmets to smaller portly armor for royalty, this floors exhibit serves as a homage to medieval London's blacksmith capabilities. The third floor's exhibit displays the range of weapons utilized over the years, from swords to pikes to bayoneted muskets to modern machine-guns. Aside from handheld weapons, mortars and cannons stood out as a explosive examples of historic armorments.

The Royal Beasts are exhibited by many different galvanized wire sculptures around the complex. Some of the more prominent sculptures include lions, a polar bear, an elephant, and monkeys. These animal sculptures were made by Kendra Haste, a sculptor, and a member of the Society of Wildlife Artists. The animals are not chosen at random but represent animals that used to be kept at the Tower. Exotic animals were given as gifts to different members of the monarchy, for example, Holy Roman Emperor Frederick II gave Henry III three lions, said to compliment the three lions on his shield, to commemorate Frederick II's marriage to Henry the III's sister, Isabella.
The animals were also used as a tourist attraction in the 16th century. People would flock to see exotic animals housed at the Tower. Top "entertainers" included:

Six ravens live at the Tower of London and there is a legend that if there is not six ravens at the tower at all times the monarch and the kingdom will fall. They are sometimes referred to as the guardians of the Tower. Charles II had the idea that the ravens should be protected, because he believed the legend, and now all of the ravens have one wing that is trimmed to prevent them from leaving the tower. Currently there are seven ravens, the required six plus one spare in case one of the six flies away. The raven's shelter is kept next to the Wakefield tower but they can freely move anywhere around the Tower of London and are often found in various open spaces of the Tower.

The Medieval palace is contained in the St. Thomas's tower built by Edward I and the Wakefield tower built by Henry III. This was used by Henry III and his son Edward I when they where visiting the fortress to meet visitors and do business. It also contains a replica of Edward I's bed and information on how furniture for Kings in that time period where made to be mobile since they would only visit each fortress for a short period of time.