It is advised that you click Actions>Edit for this document, and copy the entire contents. Then, create a new page on this site using the title of your project as the page name. Past the copied contents from this template page into your newly created page. Then, rename the "Title of this Milestone" in the top-level heading and infobox above to the name of your project or something appropriate related to your milestone. Change the User "credit" name to link to your profile page. Upload an image of your own that captures the essence of this milestone, then replace the "ProjectPicture.jpg" above with the new image name. Replace "Your Project Page Picture Caption" above with your first and last name. Delete this whole paragraph beneath the Project Title and credit up til but not including the Table of Contents tag __TOC__.

Now you're on your own! Your milestone must include a thorough and detailed background section with detailed subsections; if additional articles are required to be referenced in this background section, create those as well and link to them (the creation of all pages is tracked by the wiki site and attributed to your username). Remember to use rich multimedia whenever possible. Consult the Help page as needed! Remember, if you don't see an article on this site that is an integral part of your project, create it! Your entire page-creating/page-editing history factors into your overall grade.


Parts of a Sword 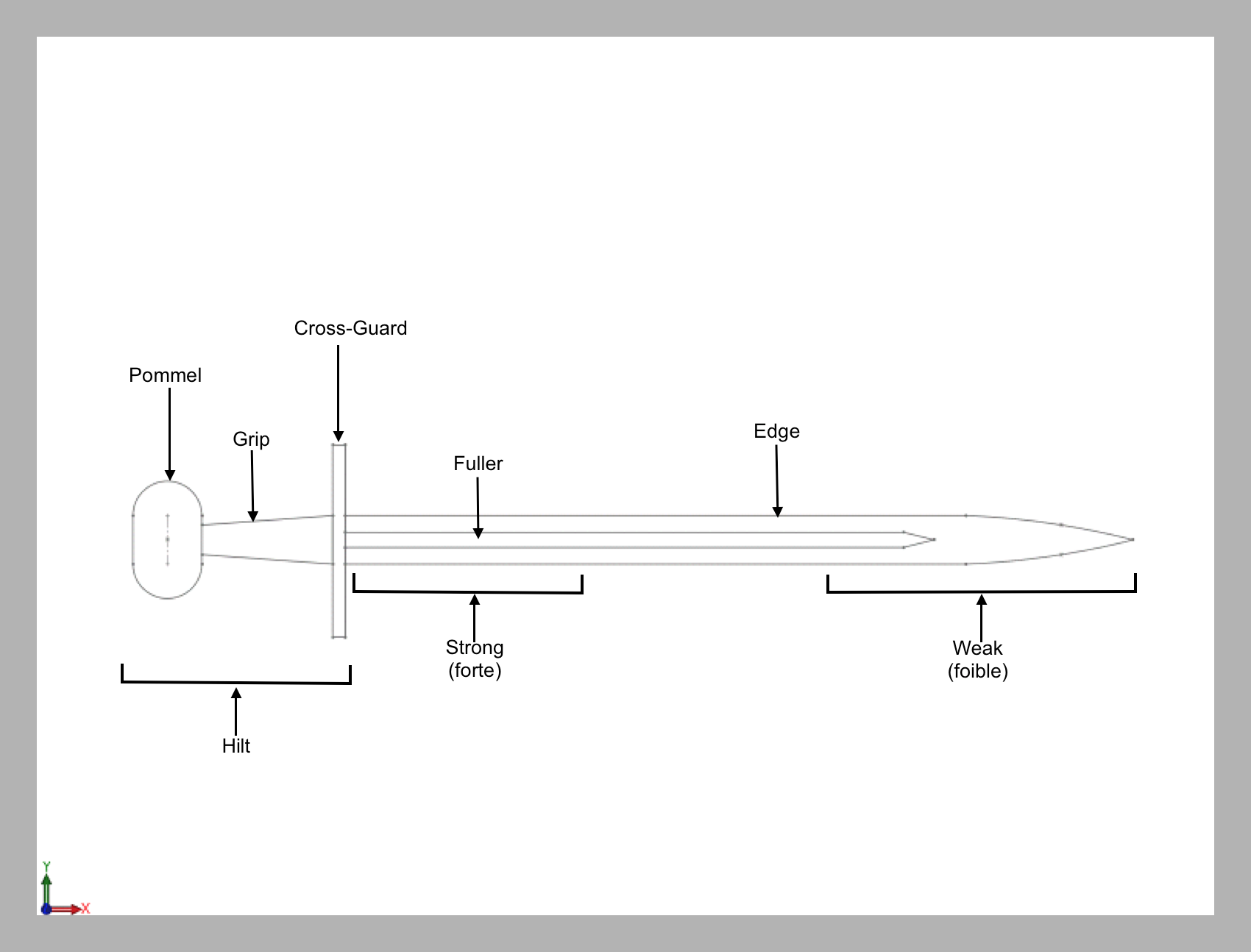 A Diagram of a Sword with it's parts labeled

One of the first steps to learn how to use a long sword is understanding all and identifying all the different parts of it.

Fiore dei Liberi was a master in the Bolognese school of fencing in northern Italy and is now the primary source used for 15th-century Italian fighting due to his four surviving treaties; 'Pisani-Dossi', 'Getty', 'Morgan', and Florius 'De Arts Luctandi'. Not much is know about Fiore except for what he wrote about himself in the prologues of his treaties. According the Getty prologue, Fiore was a noble whose estates were based in Premariacco, a small town in north-east Italy. At an early age Fiore began training and traveling to learn martial arts. In his treatises Fiore tells us that he traveled to different regions and studied under and then later taught many people. During his time as a teacher Fiore tells that he prepared gentlemen for duels, some of his students include Piero del Verde, Galeazzo da Mantova, Lancilotto Beccaria of Pavia, Giannino de Bavo of Milan and Azzone da Castelbarco. Fiore even tells that he himself had to fight five duels against other masters wearing only an arming jacket and gloves rather then armour. Not much is known about his death but his treaties serve as his legacy.

Abrazare - Unarmed Combat, combine both grappling and striking.
Azza - Axe; refers to Poll Axe.
Colpi - Blows, as in strikes.
Colpi Fendente - Downward blows. In Fiore's system these blows take the path from tooth to knee at an oblique angle.
Colpi Mezzani - Middle/horizontal blows. These are done with the True Edge leading from the right and the False Edge leading from the left.
Colpi Sottani - Upward blows. Normally done with the false edge, enabling a quick return with a fendente.
Coverta - Cover. An action that will cover that line of attack which will allow for the fighter to move to safety.
Daga - Dagger. The dagger used in Fiore's text is a rondel dagger which has no real edge but rather a point so it is best used to stab instead of cut.
Fendente - Downward blow.
Gioco Largo - Wide, loose play; done at a distance. Gioco Stretto - Tight, narrow play. This is used to describe when a fight enters close range to grapple with their opponent or seize the opponent's weapon.
Guardia - A guard against an attack.
Lanza - Spear when on foot, but a lance when on a horse.
Ligadura Mezana - Middle Bind.
Ligadura Soprana - High Bind.
Ligadura Sottana - Under bind.
Mezza Volta - Half turn, refers to passing footwork.
Posta - A position that simultaneously defends from attacks and threatens attacks.
Prese - A hold, take or catch depending on the context.
Rebattere - Beat. The action of beating back an attack.
Spada - Sword.
Spada a Uno Mano - One handed sword.
Spada a due mani - Two handed sword.
Tagli - Cut or slice.
Tutta Volta - Full/Complete turn.
Volta Stabile - Footwork where the fighter turns on the balls of their feet to face the opposite direction.

...use as many subsections or main sections as you need to support the claims for why what you did related to your Background section...

Add a references section; consult the Help page for details about inserting citations in this page.