The science museum started in 1857 as part of the South Kensington Museum under Bennet Woodcroft. According to the timeline of events, the Patent Office Museum also opened on the site. [1] It wasn't until 1862 when the Science collections move to separate buildings on Exhibition Road. In 1909, the Science and Engineering collections housed and running desperately at the time officially got the name Science Museum which is kept today. [1]

In 1956 the first transatlantic telephone cable, TAT-1, was laid. In the section connecting Newfoundland and Nova Scotia rigid electronic repeaters were included to boost the electrical signals sent through the cable. Another section of the cable connecting Newfoundland and Oban, Scotland used flexible repeaters developed by Bell Telephone Laboratories.

The racing boat "Miss England" is currently on display in the London Science Museum. The boats claim to fame is that it won the world championship in 1929 taking the acolade away from the previous champion "Miss America IV". Captained by Henry Segrave it's single motor and lightweight design gave it the edge it needed over the heavier dual engine boat captained by Gar Wood. The manufacturer was the English company called "The Power Boat Company".

The RL-10 engine was used by NASA to convert missiles into space rockets. Two RL-10s were used in Atlas and Titan rockets, increasing their power. The increased power allowed unmanned spacecrafts to propel to the Moon and towards all the other planets.

The V-2 engine was critical for the rockets that landed mankind on the Moon. Developed by the German army during the Second World War, the engine propelled the world's first long-range missile. The engine is capable of 25 tons of thrust, boosting the missile 200 miles. This makes it the first vehicle to reach space. Direct descendants of the V-2 engine are responsible for the first US satellite entering into orbit and launching the first American into space.

On June 16th, 1963 Valentina Tereshkova ascended into space, making her the first woman to travel to space. This was an extremely major victory for women in space exploration and it took another twenty years before any other women were able to travel to space. Even today, she is still the only woman to have completed a space mission on her own.

Valentina Tereshkova was born in a small village in Russia and did not start school until she was 8 years old. She left school when she was 16 and worked at a textile factory in order to help her mother afford to care for their family. The Soviet government began selecting women to be a part of their space program and Tereshkova was chosen out of over 400 applicants to participate in the program. He family and friends did not know that she would be going to space, and she kept her plans completely secret. She was selected to pilot the Vostok 6 after 18 months of intense training and preparation.

Tereshkova is described as being a hero and an icon for gender equality, not only in Russia but around the world. After her space mission, she entered the political world and represented the USSR at many different international organizations. She also received the 'Greatest Woman Achiever of the Century' award in 2000 for all of her achievements and hardworking.

The first world war what is an introduction to a new kind of War in which large armies with powerful weapons produced casualty levels unparalleled to any wars previous in scale and severity. On the battlefield, conditions were dependent on medical evacuation, treatment, and care. Medical teams faced new challenges such as the need to immediate save soldiers lives on the battlefield as well as the need for long term care at home. The need for new techniques, technologies and strategies were needed while others strategies were adapted and evolved. The personal impact of this war lasted for decades and many lives of those wounded were changed forever. This war however caused Great Britain to develop better centers of medical care and welfare and medical care facilities that specialized in the treatment and rehabilitation of those who need. This war increase the social awareness towards the new generation of disabled veterans.

Fly 360 is a flight simulator station. People who step into this station turn into fighter pilots who are tasked with flying a plane in combat. The objective while flying is to take out enemy planes. While in the "cockpit", the people piloting have full control of the plane and they are able fly the as they please. The flying is then accompanied with real time motion where the whole cockpit moves according to how they plane moves. This allows the people inside to get a true feeling for how flying in combat feels.

===Silver plated Model of the Forth Bridge===, 1882 Construction of the Forth Bridge was started The Forth Bridge, when completed in 1890, in 1882 to replace the ferry which carried the was the largest span bridge in the world. 57 men lost their lives. east coast rail link north over the Firth ofForth. During construction The proposal had been vigorously opposed The bridge took seven years tobuild, cost €3 million in the money of the timeand used by the rival rail companies which could over 50,000 tonsofsteel, lt was the largest operate faster via the westcoast routes to civil engineering structure achieved during Perth and the Highlands, This 1:480scale model was built to illustrate the proposal to the nineteenth century, and though William aparliamentarycommittee. Morris described t as the supremest specimen ugliness, remainsone of In 1879, the Tay Bridge had fallen in a storm. the industrial wonders of the world, This disaster ensured that the Forth Bridge auwe uimwaronv was designed using themost thorough structural analysis then possible, lt was also the first bridge to use the new steel produced by the Siemensopen-hearth process. The novel design came from the engineering partnership of Fowler and Baker, William as chief contractor,

After you pass through the flying simulators on the third floor you enter a gallery room full of airplanes. But one of the first displays is on the hot air balloon, also referred to a cloud in a bag.

Henry Cavendish discovered hydrogen in 1766 which he called 'inflammable air' and proved it was lighter than air. After reading Joseph Priestly's Experiments and Observations on Different Kinds of Air, Joseph Montgolfier started experiments. With help from his brother Etienne, they were able to successful fly small paper and cloth balloons in 1782. The Montgolfier Brothers may not have known all the physics behind the hot air balloon, but they used old shoes and rotting meat as fuel since it created a dense smoke to fill the balloon. In September 1783 they flew a balloon from Versailles so King Lousi XVI and Marie Antoinette could watch as the sheep, cockerel and duck all landed safely. This proved that traveling into the upper atmosphere was not fatal.

J A C Charles was a young scientist who began to experiment with the hydrogen gas after hearing about the Montgolfier's balloons. With help from brother Robert, a small test ballon with rubberizing the silk envelope to retain the gas, was sent off on August 27th, 1783. Charles and Robert then flew for two hours in a life size one on December 1st, 1783. Charles then flew by himself one more time before never flying again.

On display is a model of the hot air balloon that made the first human flight. The two passengers were Pilatre de Rozier, a science teacher, and Francois Laurent. They took off form Bois de Boulogne on November 21st, 1783. It was a dangerous twenty five minute ride over Paris but they safely landed in parkland near the present day Place d'Italie.

This interactive exhibit is designed for young engineers to try to solve future world problems. The first exhibit is the Play Rugged Rovers. In this exhibit, you are to design a space rover to be used on mars. You have to draw a body design and place the wheels. The goal is for the rover to go as far as possible without flipping over or crashing. There is also a big picture game. This game is the building of systems to make our lives easier. They have two versions of this game. One of them requires you to build a power grid to keep everyone having energy. The other one is the designing of a baggage handling system to make sure people don't lose their luggage and that there is nothing dangerous inside. Finally there is Futureville. This game shows the not too distant future to show where engineers engineer in the least expected places. This exhibit is designed for teens aged 11-15 who have in interest in engineering.

Our Lives In Data

Every day more and more data is collected. Data is collected from taking pictures, morning commutes, and more of our lives are being recorded as data every day. When you look at this data is shows patterns which help us see things that we could not see before. By looking at our world through data it provides a new perspective. This collection of data is known as 'big data'.
Examples of data being collected and its use: Search histories show our fears, journey data shows how cities are growing, smartphones show where traffic jams are, social media profiles reveal a lot about our personalities, energy meters can tell when we are home. What we purchase reveals life events, ebooks can measure our reading speeds, social media posts reveal who'll win an election, and so on and so on.
There are many small interactive exhibits inside the Our Lives in Data exhibit. One of them asks you a series of questions and determines how willing you are to share information. Another just by taking your picture compares it with the other data it has received to predict your age, gender, and happiness level. There is a display on the data collected from tube stations, and one on how much data is collected through Facebook.

This collection of clocks and watches is the oldest of its kind in the world, first begun in 1813 by the Worshipful Company of Clockmakers. The collection was first displayed in 1873 in the City's Guildhall, where it remained until 2014. The purpose of the collection is to tell the story of "The Clockmakers of London."

The collection includes more than one thousand watches, eighty clocks, twenty-five marine chronometers, and over a dozen sundials. These artifacts showcase the history of innovation in clockmaking in London from 1600 to the present day. 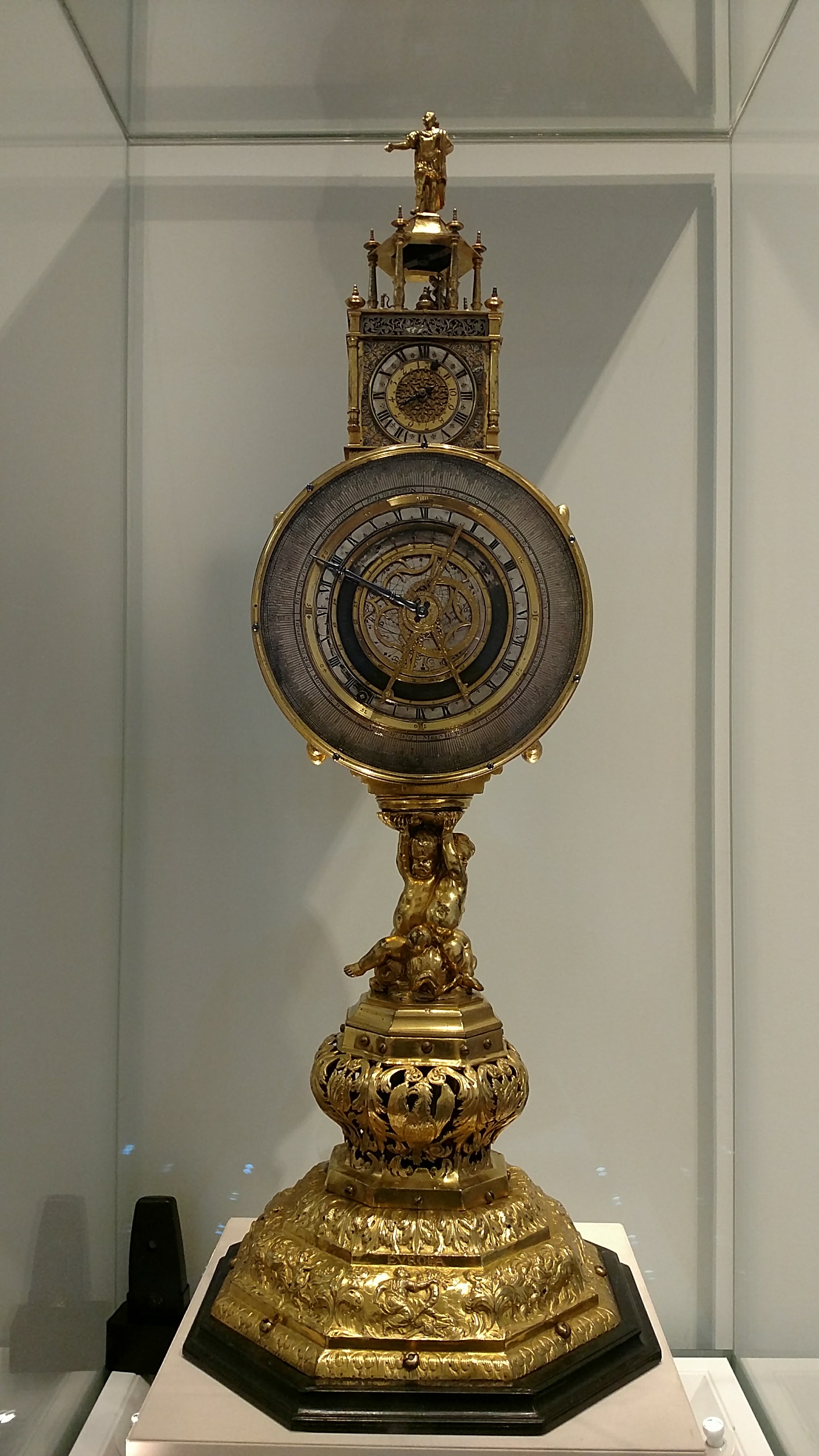 This clock is considered by many to be the masterpiece of clockmaker Johann Schneider, and is constructed to conform with the 1577 Augsburg Clockmakers' Guild rules. The clock is adorned by an automaton figure of St. George, standing above a twelve hour dial. The outermost ring of the main dial is a one-year calendar, with each day marked with the name of a corresponding Saint. Inside the calendar ring is a minute ring and a twenty-four hour ring. Inside these is a silver ring showing which hours of the day are light and dark. At the very center of the rings is an astrolabe. The steel hand of the clock shows the minutes, while the gilt hands show the hour and the age of the moon. On the back of the clock are shown the day of the week and the month.

This was an important part of Rugby Radio Station's transmitter that helped to send messages around the world. This device linked the station's electrical generators and the masts outside being tuned in the process. The use of materials such as American whitewood, enamel, and cotton helped to insulate the device and reduce power loss. The purpose of aerial turning inductor was to correct the frequency of the broadcast to allow it to travel across the world.