The Royal Albert Hall is a concert hall located in South Kensington, London. It has a capacity of up to 5,272 seats. It's namesake is for Prince Albert, Queen Victoria's husband. It was opened by her in 1871. Each year it shows performances in wide variety including classical, rock and pop concerts, ballet, opera, film screenings with live orchestra, sports, award ceremonies, school and community events, charity performances and banquets.

The Royal Albert Hall site was once the Gore estate. Gore estate, according to the Royal Albert Hall website, were bought by the Exhibition’s Royal Commission to create the "cultural quarter" called Albertopolis,named after Prince Albert, in 1851.[1] Albertopolis is now the home to the Natural History Museum, Victoria and Albert Museum, the Science Museum and the Imperial College.

The building was to be named originally The Central Hall of Arts and Sciences it was changed to the Royal Albert Hall by Queen Victoria in the honor of her husband Prince Albert.The official name of the hall is The Royal Albert Hall of Arts and Sciences. On the 20th of May 1867, The foundation stone was laid by Queen Victoria in a great ceremony.[1] The building was opened on the 29th of March 1871 by the Prince of Wales since the Queen was too emotional to speak at the opening. [2] To this day, the hall has been used all different displays and performances of the arts and sciences, including ballet, exhibitions, conventions, memorial concerts, classical music concerts, pop music performances, theater, and so much more. 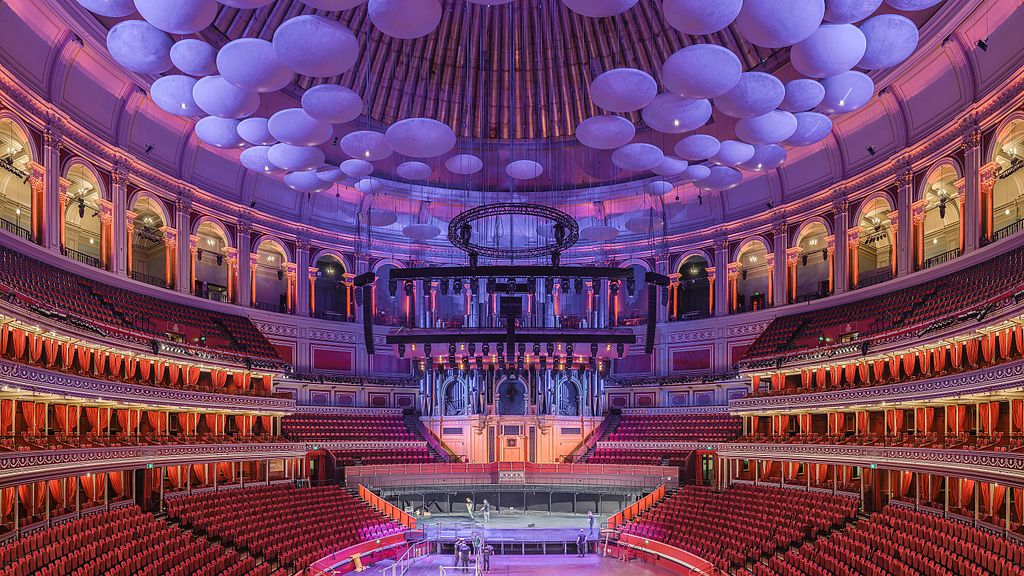 This grand theater can seat up to 5,272. It is a stadium style theater. The Hall is circular with seating all around the bottom stage. A gallery is located all around the hall. The choir seating is right next to the grand organ above the main stage section. The arena is used for sporting events as well as some ballet performances such as Swan Lake. It can also be used for extra seating if needed.

The sound echo that used to be heard in the the grand theater is now gone hanks to the Fibreglass acoustic diffusing discs on the ceiling known as Mushrooms.[3] Acosutic testing that was done in the 1960 brought the idea of this solution. Originally there were 135 mushrooms that were made by the Yorkshire Fibreglass Company however in 2001, 50 diffusers were removed based on more advanced acoustic testing by Peutz Associates.[3]

According to the company's website, this ballet troupe was founded in 1950's called ‘Festival Ballet’ by Anton Dolin, Alicia Markova and Julian Braunsweg.[4] From 1951, the company has toured worldwide performing at several places. In 1965, after a big financial expenditure with a production of Swan Lake, the Arts Council of Great Britain agreed to grant a subsidy to the Company and introduced a new Administrator, Donald Albery, to lead the Company.[4]

Beryl Grey in 1968 was appointed to be Artistic Director of London Festival Ballet and capitalize on seasons at the London Coliseum to help raise awareness for the Company.[4] This great business deal has allowed the company to grow and flourish. Beryl Grey was succeed by John Field in 1979. During his involvement, according to the company's website, the London Festival Ballet became the first British classical ballet company to establish a formal outreach and education program.[4] 1989 saw changes in the funding system of the Company as well as the Company’s name change to ‘English National Ballet’.

The year 1997 saw the start of series of performances for the Royal Albert Hall, with the ballet Swan Lake which was attended by Diana, Princess of Wales before her death. Tamara Rojo as the new Artistic Director has introduced new works while still honoring traditional ballet.[4] The English National Ballet has won awards such as the Winner of the Stef Stefanou Award for Outstanding Company at the 2014 and 2016 Critics’ Circle National Dance Awards, the production of Lest we Forget was named Winner of the The South Bank Sky Arts Awards 2015 and the Manchester Theatre Awards’ Robert Robson Award for Dance for three years in a row.[4] English National Ballet is still doing what it has done throughout the years with taking ballet all over the world.

The Royal Albert Hall first put on this unique production in 1997 when Diana, Princess of Whales attended the production. This performance's music was the original Tchaikovsky music played by the English National Ballet Philharmonic. The dancers were from the English National Ballet. The choreographer, Derek Deane, used the theater space to his advantage in his dance choreography. It is explained in detail in a review. "This distraction aside, Deane’s Swan Lake is a tremendous achievement – the choreography is configured so that it can be seen front-on from all sides (though this does mean you get a lot of gusset at times). The traditional pas de six is ramped up to a pas de douze, impeccably danced in wonderful costumes of luminous greenish gold — Laurretta Summerscales is particularly compelling here, long-limbed and lofty. Though they’re decked out in drab brown, a troupe of attentive peasants performs with equally stunning precision when their time comes. It’s a shame that Michael Coleman’s uncomfortably rotund royal tutor keeps pestering one of these agile and nubile wenches, who has to respond to his advances with a broad smile, proof that everything’s festive and fine within the feudal system. Then, of course, there’s the stirring sight of 60 white swans filling the stage, bourreeing on pointe together, their arms in perfect alignment. It’s absolutely mesmerising." [5] The performance ran from 1st-12th June 2016.

This performance has received many positive reviews. What seems to be the great factor to this performance is the stage it performs on. Luke Jennings from the Guardian explains this. "Configured for the vast auditorium of the Royal Albert Hall, it features no fewer than 60 swans. When they make their first entrance, wave after wave of them, it’s awesome. To see them move and breathe as one is also profoundly touching. Five dozen young women, refuting every generalisation about their generation – the petulant individualism, the zero attention span, the need for immediate gratification – and enacting a collective act of homage to this most rigorous of art forms." [6]

Another review from the Express gives the performance an encore worthy review. "English National Ballet’s Swan Lake..., is played with no distracting scenery and at the centre of 5,000 faces. With nowhere to hide, the dancers tell the story of love, betrayal and forgiveness with an honest conviction. ...Deane has opened up this gorgeous classic for all to enjoy playing..... If you are curious about ballet, now is the time." [7] Overall, this performance is praised for it's unique choreography that is used on a stage for the Royal Albert Hall.