"One of the most popular and influential British artists of the twentieth century returns to Tate Britain for his most comprehensive exhibition yet"[1] Mr. Hockney is a renown artist that in the last sixty years has had various accomplishments in painting, drawing, print, photography and video. With almost eighty years old, he brings to Tate Britain an exposition that, according to him, he had never shown to the public before. What makes his work so outstanding from other contemporary artists is his flexibility and ability to adapt to the use of new technologies and applications to create his art. He changes his style and ways of working to appeal to the different audiences and he expresses it freely "I live in the now", he says. "Time is elastic, and I play with that idea" he also said in a promotional video for this exposition in Tate Britain.

Joseph Mallord William Turner (1775–1851) was a master of painting history, landscape and marine painting. His largest collection of art can be found at Tate Britain. He is know as the father of modern art since he was unlike artists at his time. He is is the most celebrated painter in England. [2] Pictured are some of his works that are displayed in Tate Britain. 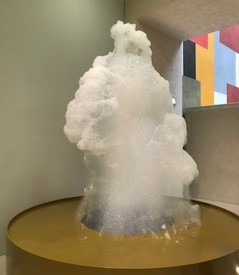