Difference between revisions of "The Gardens at Hampton Court Palace" 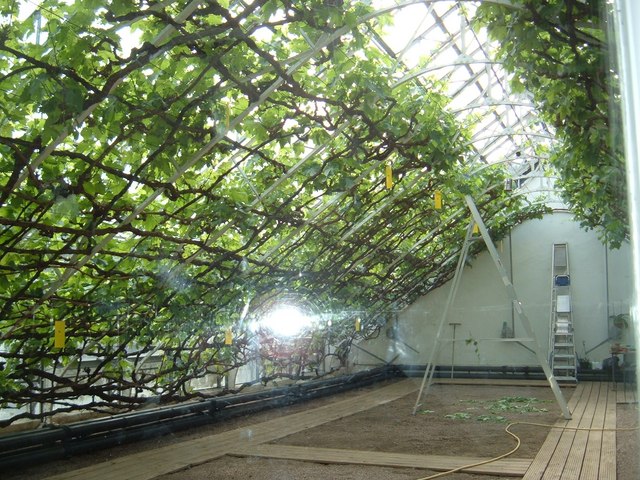 This Great Grape Vine is know as the worlds largest. Planted in 1768 by Lancelot Brown by, according to the Hampton Court Palace website, cuttings from another vine at Valentines Mansion located in Essex. [1] The vine is now 4 meters around the base and the longest rod is 36.5 meters. The average crop yields 272 kg of grapes each year. The grapes are sold during the first 3 weeks of September.

The magic garden is the more family friendly garden which is located next to the Tiltyard and the Kitchen Gardens. This garden is a unique, interactive, play garden that was inspired by the history and the stories of the Hampton Court palace and was built on King Henry VIII's tiltyard. This garden is for children ages 5 to 13 and the young at heart who want to explore the tiltyards towers and aerial walkways to the lair of of a mystical fire breathing dragon who protects a jeweled crown and an underground grotto. Bonus there are mystical beasts roaming the grounds!

This was the home of the food factory for the palace's fruit and vegetables. Currently the garden has been restored to an approximation of its 18th century appearance, the garden was created in the 17th century for William and Mary. Queen Victoria moved the palace gardens to Windsor Castle upon her ascension to the throne, causing the gardens to be leased as market gardens and eventually becoming a pleasure garden in the 1930's. The garden also currently is planted with historically accurate crops, that can be purchases during the summer from the garden stall.

The Lower Orangery Garden and Terrace

The lower Orangery Garden used to be the home of the Exotick Plant collection or Queen Mary II, however today the the garden has returned to its former glory. Today the garden houses secret pond garden, which was the original place for the royal courts freshwater fish.
.

The first Privy (Private) Garden at Hampton Court Palace was constructed between 1530 and 158 for King Henry VIII. Its original design was split into two areas, one containing an array of brass sundials and statues, and the other dominated by a bowling alley, a banqueting house and the Water Gallery, which provided a landing stage from the Thames. By 1599, under Elizabeth I, the Privy Garden had acquired an assortment of topiary. Between 1599 and 1659 the Garden's layout changed again to focus on statutory situated on four grass plats. The Garden went through several more redesigns between 1689 and the 19th century, but by the mid-1850s it underwent one of its most extreme changes. The Privy Garden was shaded by large trees and provided a resting point for visitors. By this time the Privy Garden was no longer private, welcoming individuals other than the King and his closest guests[2].

The original 1702 layout of the Privy garden was rediscovered during the 1995 restoration effort of the Palace. The Garden was restored to its original state, including the cultivation of the same flowers and shrubs that were first grown here. The Privy Garden was reopened to the public in 1995[2]

The Rose Garden takes visitors through a relaxing stroll through different roses. Many different colors of roses, like red, pink, and yellow to name a few, line the walls and center of the garden. There are three stone statues that are the centerpiece of the rose garden. The garden was created in 1924 and was planted informally with old English varieties of roses. Visitors first were allowed into the garden when they realized that visitors to the palace were growing in the years after World War I. In 1937, many different gardeners created the formal layout of the mixes of roses that are in the garden today. The kitchen garden was shortened to allow room for the rose garden to be put into place. It used to be part of the Tiltyard Gardens, but was divided up for the kitchen and magic gardens. The Tilityard was where competitors trained for jousting tournaments and other entertainment for King Henry VIII.

Inside the wilderness garden is a small maze. The maze was part of the original wilderness forest, but became very popular during Queen Victoria's time when visitors tried to find their own way through the maze. The maze offered high secluded bushes for members of the royal family to walk with lots of privacy from the outside world. Today, the maze has shrunk from its original size, but still holds the prize in the center. In the center of the maze, At the center of the maze (if one is lucky enough to find their way to the center), they will be greeted by a quiet space to talk and sit on benches that Queen Victoria once sat on.