The original Globe Theater has been the home of Shakespeare and his plays since the beginning. During the English Civil War though the theater was closed down and demolished for tenant houses. The new Shakespearean Theater which opened in 1997, a few hundred feet away, strives to keep the original Globe's architectural design and classic Shakespeare plays.

In 1576, during the first years of Elizabeth I’s reign, an actor/manager named James Burbage built a Theatre in Shoreditch.[1] It was the first built playhouse in London as previously play companies used inns, inn yards, college halls and private houses for their performances. In the 1580's, Shakespeare joined the resident troupe at the Theatre. The company, which was later known as the King’s Men, remained there for 20 years. Then in 1597, James Burbage died.Then in 1598, the company leased land near the Rose and demolished the Theatre. In early 1599, the Globe Theatre opened and started showing Shakespeare’s plays.[1] According to the Shakespearean Globe website, sadly, in 1613, during a performance of Henry VIII, a stage cannon lit fire to the roof and the theatre burned to the ground.[1] The theatre was rebuilt. It was opened until the area was taken over by the Puritans in 1642.[1] It was then demolished in 1644.[1]

The current Globe Theater (now know as the Shakespearean Globe) was opened in 1997.[2] An American actor, director and producer Sam Wanamaker founded the Trust in 1970 that eventually raised the money to rebuild a replica Globe Theater.[2] 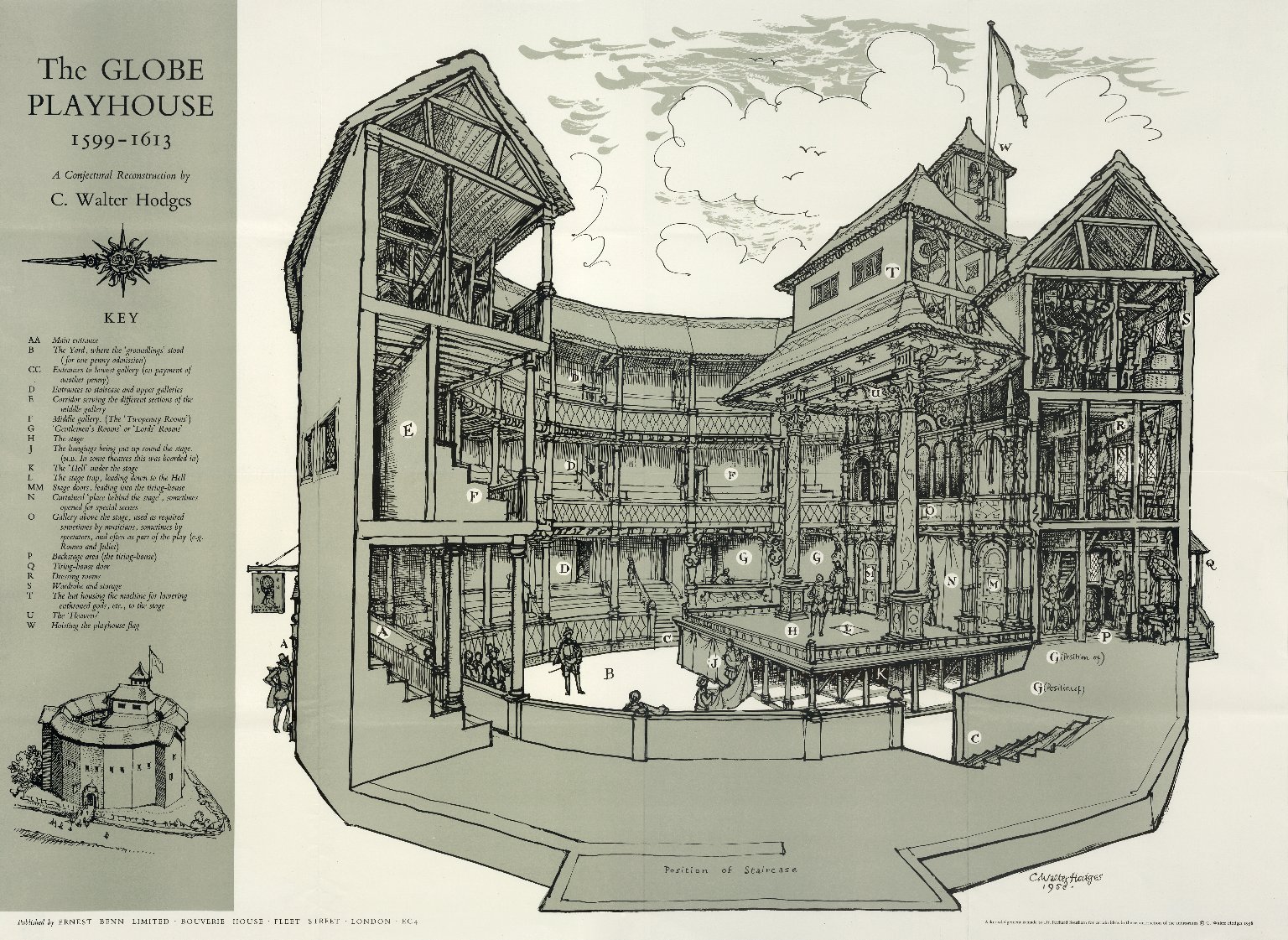 Reconstruction of the Globe by C. Walter Hodges

The current globe was constructed to look like to original globe as much as possible. The actual look of the original globe is something that might have to always be a mystery. Fortunately, some prints by John Norden and Wenceslaus Hollar and other written accounts give us an idea as to what it looked liked. [2] The excavation of the Rose theater in 1989 showed the polygonal shape of the theatre. [2] One of the Globe's architect explains the layout well by saying: "The Globe was built as an experiment to investigate the lost open-air playhouse form of drama in all its aspects. It is vital that there is a continual process of re-assessment, that all the judgments made during construction are re-evaluated when new evidence or new interpretations surface, and even that the old arguments, so hotly debated before construction, are continually re-rehearsed." [3]

The Globe's set design is kept to a minimum because of the paintings and design of the stage. According to the glossary of the globe terms, designers can use different floor coverings, curtains, or props for a performance to change and enhance scenes.[4] The big requirement though is that the stage crew has to be able to change an entire set within an hour for another performance.

According to the glossary of terms used at the Globe, 'There is no lighting rig at the Globe.' [4] Their afternoon shows are lit by the light that enters the roof and in the evening, lights light the theatre for the affect as the Globe says 'to recreate daylight'.[4] When viewing this, one can find that there are special effect lights that are used for the story line but no spotlights are used on the actors.

Regular sound system which is used for sound effects and music mostly. The actors and actresses have mics but they are not needed since the theater is designed as a natural sound system and they project their lines.

The costumes were very modern and most could be mistake for street clothing of today. Most of the clothing worn by the actors followed a black and white colour scheme, but during the party they did were more colourful clothing. Romeo wore a style of clothing that could be attributed to punk and almost looked like Billie Joe Armstrong from the band Green Day. Juliet wore a simple white night gown that could have symbolized her purity.

Twelfth Night is an original Shakespearean play about gender confusion. It is one of Shakespeare's fun and playful plays. The play starts with two twins named Viola and Sebastian who are separated during a storm at sea. Viola goes to the land where the Duke Orsino is trying to woo the fair Olivia. Viola decided to disguise herself as a man and serve the Duke. She then finds herself falling for the Duke who wants Olivia who wants Viola as a man. So the story gets even more confusing when Sebastian is alive and both him & Viola as a man gets confused for each other. In the end everyone gets maybe not what they initially wanted but what they need.

The globe's style of this play was a lot like the style of Robin Hood Men in Tights. The characters are putting on a show and the humor is funny, sexual and stupid. The characters were also different in the sense that the clown was portrayed as a drag queen. When she was the priest she was actually a nun named Sister Topas. Sr Toby, Duke Orsino and Antonio were portrayed as Scottish with the kilts. Viola and Sebastian were performers on the boat then portrayed as white naval officers. The set was a metal staircase that doubles as a 'ship'. Props such as leaves, pull up bush disguises, and 2 metal triple bunk beds were used.

According to a review from The Culture Whisper, "Twelfth Night is delightful and enchanting, even if it is not a transformative or revolutionary adaptation. More than anything, she (Emma Rice who was the artistic director) focuses on making Shakespeare highly entertaining, accessible, joyful and communal." [5] The review also talks about this Malivolio that "straddles the line beautifully between being endlessly obnoxious and equally loveable." [5]

Another review said that this interpretation was "an absolute hoot...freely embellished and fulsomely overdone. ...clownish caricatures instead of credible characters." [6] The pop songs and humor made the play more fun then serious from this review's perspective. This review warns traditional Shakespeare fans that this is not an original old style performance.

Overall, of the of humor and mood from a Mel Brooks film. The show wasn't supposed to be taken as something to learn from but to give entertainment.

Romeo and Juliet is one of William Shakespeare's most famous tragedies, most likely written in the 1590s. Romeo and Juliet centers around a pair of feuding households in Verona, the Capulets and the Montagues. The play opens with a street brawl between members of the two households, leading the Prince of Verona to threaten death to any Capulet or Montague who further breaks the peace. Later, Romeo, the son of Montague, having snuck into a Capulet ball, meets Juliet, the daughter of Capulet.The two immediately fall in love. While at the ball, Romeo is recognized by Tybalt, Juliet's cousin. Tybalt attempts to kill Romeo, but is stopped by Capulet, who does not want a death in his house. Later that night, in what has become famous as the "Balcony Scene," Romeo meets Juliet and they vow to marry. The marriage takes place in secret the next day, with the help of Friar Laurence.

Later, Tybalt challenges Romeo to a duel, but Romeo, now considering Tybalt to be kin, refuses to fight. Mercutio, a close friend of Romeo, accepts the duel in his place. Mercutio is fatally wounded in the resulting fight, leading Romeo to seek out Tybalt in revenge. Romeo kills Tybalt and is banished by the Prince of Verona. Juliet's grief over the banishment of Romeo is misinterpreted by her father as grief over the death of Tybalt, and he attempts to cheer her by arranging her marriage to Count Paris. Juliet seeks help from Friar Laurence in escaping the marriage. He offers her a potion that will put her in a death-like state, and suggests that she take it the night before the wedding. Friar Laurence explains that she will be laid in the Capulet family crypt, and that he will send word to Romeo, now outside the city, to come, collect Juliet, and together flee the city. Juliet accepts this plan, and drinks the potion the night before her marriage to Paris. However, Friar Laurence's message does not get to Romeo, who instead hears only that Juliet has died. Grief-stricken, Romeo goes to the Capulet crypt. There he encounters Paris, who mistakes him for a vandal. Romeo and Paris fight, and Paris dies. Romeo then poisons himself and dies next to Juliet's body. After his death, Juliet awakens. Finding Romeo dead, she stabs herself with his dagger and dies. The deaths of Romeo and Juliet bring together their two families, ending their feud.

Sadly, the performance reviews for this interpretation are not good. No review seen gave the performance over 3 stars out of 5. A big comment comes from one of the guardian's theatre critics Michael Billington saying: "A predominantly young audience seemed happy enough but, for me, this was another example of vandalised Shakespeare." [7] Another gave a good explanation as to why it was so bad:

"(the director) Kramer’s approach is about as far from polite as you can get. It waggles its posterior in the face of the purists. There is voice-over and strobe lighting, nipple tassels and, in one scene, nipple licking. Those contentious speakers are given a good work out, and there are moments where you can almost hear the sphincters of the more timid members of the Globe’s board tightening.

Some of Kramer's decisions are baffling, others misfire badly, but his production is never dull. He animates this most frustrating of plays, even if he doesn’t get under the skin of these two teens wedded to death."[8]

In an article comparing all of the reviews a concluding thought is said. "It's certainly not for purists, that's for sure. Daniel Kramer's production follows the Emma Rice playbook, eschewing the traditional approach the Globe grew up with and embracing the eclectic, electronically-aided exuberance it has provoked headlines for during recent times." [9] Personally, the play was as described. A dark mockery of Shakespeare's classic of Romeo & Juliet. Not even a real balcony scene was used in this production. Given all of this information it is no surprise no one finds this production to be a classic.

The Globe Theater, as a whole, still has the original structure and scenery from Shakespeare's time but there are aspects that show modernizing. The first modern objects that can be seen are the fake trees placed around the buildings. These trees have a real tree trunk that has been cut at the top and bottom. The bottom of the tree trunk is strapped down with metal clamps instead of its original roots. The top part of the trunk has fake branches and leaves, carved out of wooden sheets and painted, that are strapped together and also strapped to the tree trunk. This shows modern art displayed at the Globe Theater meaning it is still tied to our world today.