The Wallace Collection is a free to the public art collection that is houes in the once home of the Seymour family. It is located in Manchester Square, in the City of Westminster and is split into six different departments determined by type. The collection started between 1760 and 1880 by the first four Marquesses of Hertford and Sir Richard Wallace, the illegitimate son of the 4th Marquess. In 1897, the private collections were then donated to the nation by Richard Wallace's widow after her death to be a public collection.

Inside The Wallace Collection, one can find works of many different types such as Ceramics and Glass, or Arms and Armor. There are 25 different galleries where one can wooed and impressed by 18th century French paintings and such. The collection is displayed in the private home of the late Wallace's. 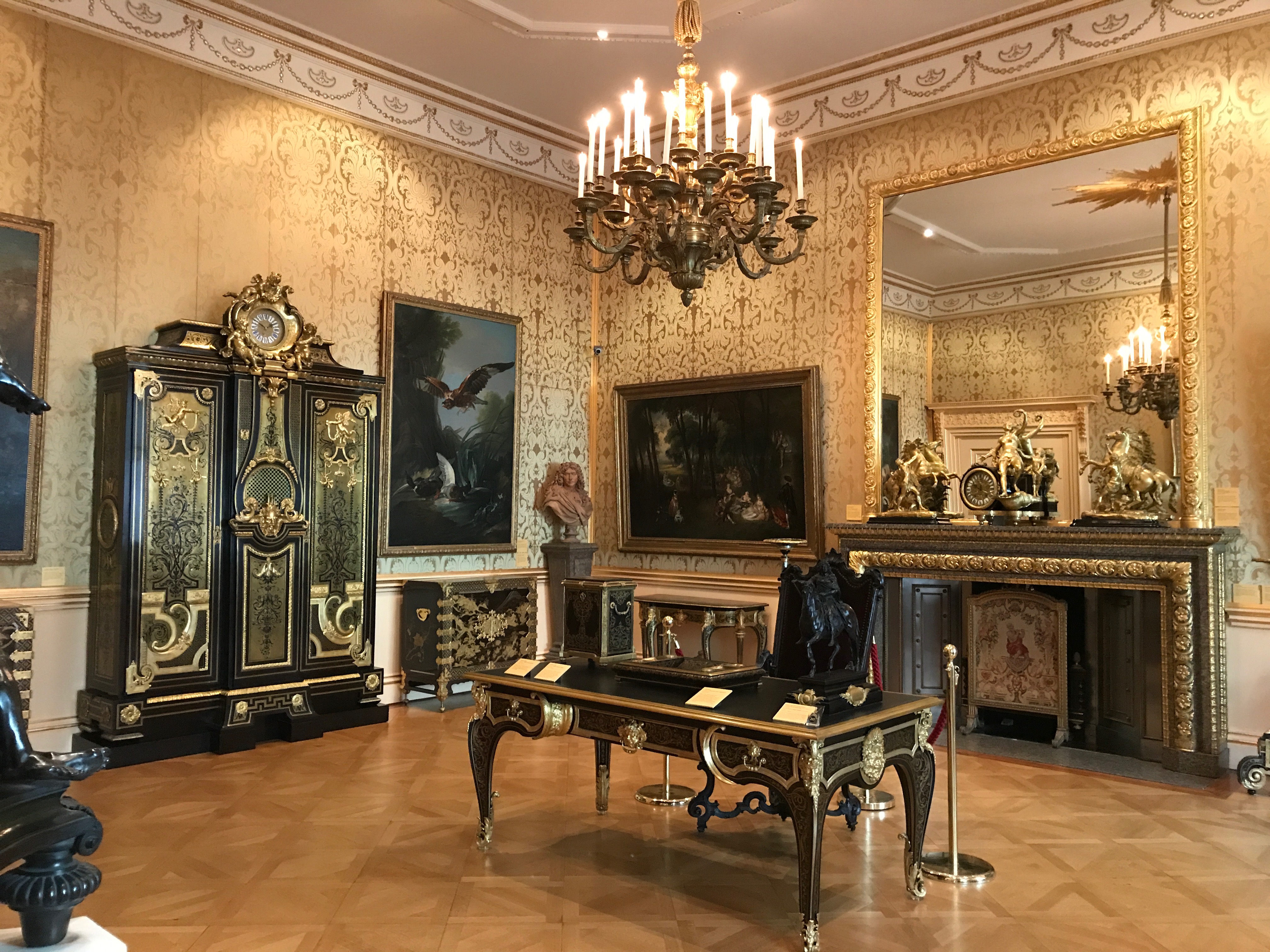 The Billiard Room is a showcase for some of the best furniture by André-Charles Boulle (1642-1732) and for the arts under Louis XIV during Régence. Boulle was a a cabinet maker to Louis XIV, the self-styled Sun King during whose reign France became pre-eminent in the arts. Louis XIV set up a well organized and efficient system of state support for the artist create the official image of the monarchy and to support the economy. In 1897 the billiard room was dominated by a huge billiard table, as was usual in many larger houses at the time. The table was not replaced during the refurbishment in the year 2000. Instead sits an ornate desk from the 1700's in its place.

The collection of the Oriental Arms was acquired mostly by the 4th Marquess of Hertford in Paris prior to his death in 1870 and was chosen by the museum for the relics fine craftsmanship and exotic, Eastern opulence and beauty. Most of the weapons in the exhibit are Indian, Persian and Turkish from the 15th to 19th century while the armour is mostly from Indo-Persia in the 18th and 19th century. These objects were collected since they were highly sought after back in the Parisian society times and today the collection is widely recognized for being one of the largest and finest collections in the UK.

Unlike medieval arms and weaponry, oriental has more colour and more embellishments. The arms used animal tusks and bones like ivory and buffalo horn and were usually silver gilded. The art was detailed and full of bright vibrant colours like pinks, blues and yellows. Many items were gold encrusted with jewels such as vases and tea pots.

Armory I displays verity of armor and weapons that seemed to be used around medieval time frame. The armors on displays are a collection of battle armor and decorative armor from around Europe. These armors have varying design and functionality depending on where they came from and how they were used. The weapons are displayed in the same fashion, varying from swords to crossbows to guns. Among them, there are declarative weapons and battle weapons which can be seen distinctly by how they look.

Field Armor and Field Armor of Otto Heinrich, Count Palatine of the Rhine

The field armor was made in 1480 and in the 19th century. It would not be used in it current form because many of the parts were made or modified in the 19th century. The backplate, left counter, and both rebraces are in their original state. The leg armor, lower arm guards, and helmet where modified in the 19th century and the breastplate, pauldrons and gauntlets were made in the 19th century. It is in the German Gothic style and seem to have come from Castle of Hohenaschau in the Tyrol, home of the von Freyberg family. The man's armor Weights 27.161 kg, the horse's armor Weights 30.07 kg, and the mail Weights 10.17 kg. This style was a relatively light and comfortable kind of armor because the kind of steel used allowed to to be made with thin plates.
Otto Heinrich was a powerful German war-leader. The armor comes from a few different sets, which is made apparent by the fact that the designs of the pauldrons and the curass have the same patterns of birds and infants while the rest of the set contains foliage and flowers. The black section was deliberately left rough when it was made to associate it with battle hardened soldiers and the gold sections marks the armor as belonging to a noble man who's armor would be a work of art as well as functional.

The pieces in the European Armories came from the collections of Sir Samuel Rush Meyrick and the comte de Nieuwerkerke. The oldest piece dates back to the 10th century. The pieces are considered to be a condensed representation of the finest and most desirable weaponry and armor from Europe. [1]

Sword with Scabbard A617

The hilt of this sword is from Saxony, Germany while the blade is from either Germany or Spain. This type of sword was associated with the Saxon Electoral or 'Trabanten' guard. The sword is 118 cm long and weighs 1.4 kg with the balance point 9.5 cm ahead of the guard. Inscribed on the blade there is a sun, the Spanish crest, a bundle of arrows, a crescent and a crown. [2]

This dagger is German and dates back to around 1600. It is 46.2 cm long and weighs 0.59 kg. The interesting thing about this dagger is that it splits into three sections. These sections are notches to catch on the blade of the opponent to take control of it. [3]

This guantlet was made by Wolfgang Grosschedel in Landshut, Germany in 1560. It is decorated with etchings of birds and foliage. This left gauntlet alone weighs 0.6 kg. [4]

The barrel of this cannon was made out of cast-bronze by Giovanni Mazzarioli in 1688 in Venice. It was found in the Venetian lagoon but is unknown how it got there. It was intended for ceremonial use as can be seen with the decorations on it that depict Jupiter and the Titans. The carriage was made out of carved walnut and steel by Angiolo Barbetti and G. Ciani. It was commissioned by Anatole Demidoff and designed by his friend Auguste de Sainson. The coat of arms of Demidoff can be seen painted on either side of the carriage.

The Back State Room was used by Sir Richard Wallace as an entertainment room for guests. During his time the walls were lined with boiserie panelling and Jacques Caffieri's chandelier hung. The chandelier still remains today along with the room's theme of dedicated to King Louis XV and his mistress, Madame de Pompadour. The current room is filled with rococo style art which flourished during their time. Along the back walls are full length display cases filled with porcelain made in France at the Sevres Factory. The porcelain is soft-paste and was made between 1752 and 1780. On the wall opposite the porcelain display case is the tall Astronomical Clock which dates back to 1750 France and is still in use today with the time and date. The wall with the grand fireplace holds a pari of candelabras on its mantle. It is unsure as to who created them but suggested Jean-Louis Prieur. He created four lily stems to mask the candleholders and allow the candle to appear as a lily bud. The theme of flowers can also been seen in the porcelain objects since it was a popular theme of the 18th century.

East Gallery II at the Wallace Collection is an exploration of 17th century Holland through art. The art features domestic and genre scenes and some of the most famous artists in the gallery are Gerard her Borch, Gabriel Metsu, and Jan Steen. Many of the paintings in the gallery contain hidden messages, although they seem to be showing a well-mannered and orderly society. Some of these hidden meanings are warning of temptations and traps that people may fall for in the real world. The 3rd Marquess of Hertford's taste for art was described by many as his only "redeeming feature". He added many works to this collection of Dutch and Flemish paintings that depicted meticulous townscapes.

This gallery contains masterpieces by the Artists Van de Velde, Nicolaes Berchem, Karel du Jardin and Philips Wouwermans. The paintings pictured below are pieces from the gallery.

In the Oval Drawing Rom you will see paintings from the high and late Rocco period in France, and there are two very iconic works from the period. Madame de Pompadour commissioned her portrait from Boucher to promote her public role as Louis XV's confidante. you can also see Fragonards' experiment with the Rocco style which is illustrated by his painting The Swing. The clock not he chimneypiece and the roll-top desk in the room show the rich taste in furniture and gilt-bronze which is a characteristic of royal and aristocratic taste. Known as the Octagon Room, this room was used by the 2nd Marchioness of Hertford as a room for entertaining. The chimneypiece which can be dates to c. 1785 is the only original one to survive in Hertford House. Sir Richard Wallace used this room to display his collection of miniatures.

The Swing by Fragonard is a rococo style painting and his most well known. This painting shows a young lady on a swing which happens to be a mistress of a high ranking official, being pushed by a bishop and the high ranking official observing her legs from beneath her. As a fine example of the rococo style with its pleasing color palette of pastel pink and mint green, the lighthearted mood, and the soft brush strokes.

The Study is a room the is dedicated to the taste in the period of Queen Marie Antoinette of France. There is a group of furniture that is owned by the Queen and it is surrounded by Sevres porcelain and French decorative arts that are from the second half of the 18th century. This is when the new, Neo-classical style came into use. You can see painting by Fragonard and Grease, which also show the transition. The Study was used by Sir Richard Wallace and a private room for writing letters and reading.