This project was about the styles of the many churches around the country. I visited several of these to get a first person experience of them and photos. After outlining what makes each of Norman, Decorated Gothic, and Perpendicular Gothic styles unique, the photos that I have taken are then the basis for illustrating those differences between the styles found within the same building. This area of study is something different for me as I have only taken the 20th Century American Foreign Relations course at WPI which is History, none in Art or Architecture. My major takeaway from this milestone is the effort put forth by the architects and builders who so eloquently decorated these churches/cathedrals for all to see. The detail is just incredible to see and cannot be found just anywhere.

This project covers what makes each architectural style chosen unique and then illustrates the differences between the styles found within the same building through photographs. The three styles chosen were European and English while at the same time having unique aspects to differentiate them. The three that I chose to examine were Norman, Decorated Gothic, and Perpendicular Gothic. It is important to show the different styles and what makes them distinct while also observing how each one influences the others. As new Bishops wanted to make their mark on the church/cathedral or sometimes portions were damaged in a war, multiple styles were included in a single building. This presents a unique look at the different styles within the same structure and interested me enough to research for my deliverable. This was my first immersive experience in architecture so it was a learning experience along the way.

Norman Architecture is a subcategory of the Romanesque style along with Anglo-Saxon. The Anglo-Saxon period came to an end in England when The Normans attacked in 1066 from western Europe.[3] The key item that made both of these belong to Romanesque was the semi-circular arch. These semi-circular arches were used in doorways, window frames, vaults, and arcades. Previously, the Anglo-Saxon churches were tall, narrow buildings with quite thin walls, but this changed with the Norman style. The Norman style was built in contrast to this with the churches being built with a wide base and the thick walls.[4]

Norman Architecture began in approximately 1060 and roughly lasted through the year 1190.[6] These years are an estimate that is widely accepted as there is always overlap in changing styles. The Norman style took many cues from the Romans to include in their style. The main one being the semi-circular arch and its design. The semi-circular arch at its time was revolutionary, as it was able to suspend massive loads over an open area. This was due to its design which included several key parts, voussoirs and the key-stone. The voussoirs were the wedge shaped stones that made up the arch passing the load to the next outer stone. The key-stone is the central stone in the arch and locks all the stones of the structure into place.[7] In addition to the semi-circular arches, some of the key characteristics included in Norman architecture were large cylindrical pillars, vaulting and small windows.[8] The windows in Norman churches were quite small, so to allow the maximum amount of light through them a distinctive technique was used. This technique is known as splaying, which is where the inside or outside of the window is wider than the middle of the window.[9] Another characteristic, vaulting, when used, was sometimes made of wood but, was usually made of stone. When it was made of wood the vaulting was quite flat. When stone was utilized, it was constructed in a round arch shape. [10] As the year 1200 approached, the semi-circular arch gave way to the pointed arch which began the Gothic style and marked an end for the Romanesque style.

Decorated Gothic is a subcategory of the Gothic style along with Perpendicular and Early English. The Gothic style's key element that united them was the pointed arch. This large transformation from the semi-circular arch to the pointed arch began around 1200 but the Decorated Gothic style began in 1250 with the addition of several key modifications and lasted until 1360.[15] This style also has been divided into two subcategories known as Geometric and Curvilinear. Geometric spanned from 1250 to 1315, while Curvilinear covered 1315 to 1360.[16] The Geometric period was focused on the circle which was mainly used in the tracery, stonework elements that supported the glass, but could also be found elsewhere. The Curvilinear period reduced or stopped its use of the circle, but introduced the Ogee and used it extensively.[17] 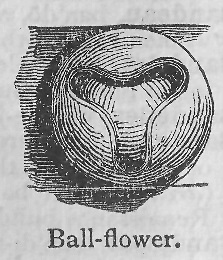 As Gothic Architecture evolved, distinctive patterns began to emerge. In regards to the Decorated style, as the name suggests, it involved extensive use of decorative elements. Several of these distinctive elements that made up the Decorated Gothic style include windows with mullions, elegant tracery of the very large windows including trefoils and quatrefoils, and vault ribbing.[20] Compared to the previous Early English period the large windows became wider in proportion to their height.[21] Later decorated styles expanded upon the ribbed vaulting by adding small ribs called liernes between other ribs. The architects formed geometrical shapes with these liernes that kept with the style.[22] At the intersection of these ribs bosses, elaborately carved ornaments, began to be used here in the Decorated period.[23] Another important decorative element that added to the aesthetic was the ball flower.[24] The ball flower was a partially opened flower carved into a sphere. All of these distinctive elements accumulated to make the Decorated Gothic style which created some amazing buildings, but as time went on the Decorated style gave way to the Perpendicular style which is explained below.

Perpendicular Gothic, also known as the Rectilinear Period, followed directly after the Decorated Gothic period. It began in 1360 and lasted until 1550.[30] It was thought that the simplification introduced, compared to the Decorated Gothic style, was due to the Black Plague and its effects on the labor force in England. This idea was proven incorrect with Gloucester Abbey's south window and Old St. Paul's cloister remains. One idea as to why decorations were scaled back was that it was for cutting costs, but that is just a possible reason and the real reason may never be known.[31]

This style, Perpendicular, belonged to the Gothic style and utilized pointed arches extensively. Perpendicular built upon the Decorated Gothic style in some aspects, and scaled back in others. A key area of scaling back occurred with the reduced tracery of the windows, while Perpendicular kept the large windows. One of the main differences that was introduced was an emphasis on vertical lines, especially the mullions of the windows, which were thinner than previously used ones.[32] Commonly crossing the mullions in Perpendicular are transoms, a horizontal crossbar in a window.[33] A change to the arch also came with this new style. The pointed arch gave way to a slightly flatter arch called the four-centered arch. This new arch was utilized alongside the existing pointed arch in the Perpendicular style. Vaulting was also expanded with this period and became more complex than previous styles; during this period it was known as fan vaulting. Overall this style was not a revolution but an evolution, building upon the previous Gothic styles.

For my Deliverable I utilized my background information about the Norman, Decorated Gothic, and Perpendicular Gothic styles to compare the different styles found within the same church/cathedral. As the architectural eras overlap and buildings are added onto or partially rebuilt, multiple styles are found within the same structure. Below I utilize photos taken of the buildings to illustrate those differences of styles. I traveled to the churches/cathedrals and took most of the photos myself, but some locations do not allow photos inside due to them being a working church so they are the official photos from the church/cathedral.

As can be seen above, in the Norman section of Winchester Cathedral, the arches consist of the semi-circular design, which is a characteristic of this style. This is in contrast to the distinctly pointed arches that are found in the Decorated Gothic and Perpendicular Gothic sections of the Cathedral. The Decorated Arches were found in the presbytery which had a remodel commissioned by Bishop Henry Woodcock in the 1300s. The Perpendicular Arches, found in the Nave, were designed by William Wynford and were completed under the guidance of several Bishops in the 14th and 15th Centuries.[38]

In the North Transept of the Cathedral, the Norman style vaulting was a flat wood surface as can be seen above. This was a part of the original cathedral commissioned by Bishop Walkelin in 1079. In the presbytery, built in the Decorated Gothic style, the breathtaking Lierne Vaulting can be found. The liernes connecting the larger ribs and eloquently carved bosses at the intersection of the ribs are distinct and unique to this style. Bishop Henry Woodcock commissioned this presbytery to be built in the 1300s.[39]

As can be seen above, the Decorated Gothic Nave of Westminster Abbey utilizes the pointed arch for its windows. This section of the Abbey, built in 1220, was overseen by Henry of Reyns, John of Gloucester and Robert of Beverley, but work had to stop because of a lack of funds. In 1272, Abbot Nicholas Litlyngton continued the structure using the original designs when more money became available. In contrast to this, the Perpendicular Henry VII chapel utilizes the four-centered arch in its design. The four-centered arch is a slightly flatter arch and a design sketch of the differences can be found in the Perpendicular background section. This latter section of the Abbey was built between 1503 and 1519, designed by Robert Janyns and William Vertue.[41]

In the Decorated style, circles were used extensively. The large circular window seen above was located in the North transept of Westminster Abbey, part of the Decorated style section. This section was completed in 1269 after having been overseen by master masons Henry of Reyns, John of Gloucester and Robert of Beverley. The Perpendicular style window, located in the Henry VII chapel, uses large vertical windows with thin mullions and transoms. This section of the Abbey was designed by Robert Janyns and William Vertue, and built between 1503 and 1519 to replace the 13th century chapel.[43]

During the Decorated Gothic style period, ribbed vaults were the style of Vaulting that was used. The Vaulting seen above is from the west section of the Nave that was built in 1272. In contrast to that, the Perpendicular style used Fan Vaulting. This Fan Vaulting located in the Henry VII chapel was significantly more complex in its radiating pattern as can be seen in the images above. This section of the Abbey was designed by Robert Janyns and William Vertue, and built between 1503 and 1519.[46]

Overall, this project has provided a background of three distinct architectural styles, Norman, Decorated Gothic, and Perpendicular Gothic. The background described many of the distinct qualities of each style. Some of these included arch style, amount of decorative elements, and Vaulting. The Deliverable took these differences and illustrated them through photographs of a building that had multiple styles present. As this study only included styles up until the mid 1500s a future project would be studying styles moving forward into the 1600s and beyond.